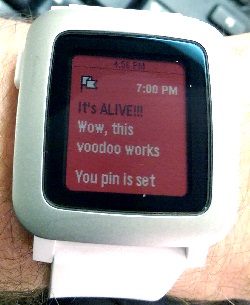 Pebble Time timeline is a very cool user interface allowing you to see future and past events and act upon them right on your watch. Right out of the box Pebble Time supports calendar pins that shows your future and past appointments in the timeline as well as weather alerts. But the real power comes from 3rd party apps using timeline – they can add anything from sports scores to latest news to TV showtimes – limit is just your imagination.
Pebble has always had open SDK – this is one of its major strengths, and Timeline is not an exception. Timeline API is a very straightforward way to push your own pins to users of your app. There’re various examples and libraries including PHP and node.js on how to deal with the timeline, but I, being mostly a Microsoft developer by trade, decided to bring Timeline into .NET. This particular example is in ASP.NET – pin is pushed from Webpage when user clicks a button, but it’s just one of the possible scenarios.

In order to push timeline pins successfully you will need 2 pieces: