Pebble SDK provides very cool features for programming watchapps and watchfaces. And combining them can yield very useful results. For example “out of the box” Pebble doesn’t have a slider layer – a layer that would slide in over existing information to display new one. But we have all the basic ingredients to create one:

This example uses BitmapLayer to display images, but it just as well maybe text or other items.

Here’s a basic flow of how SliderLayer works: 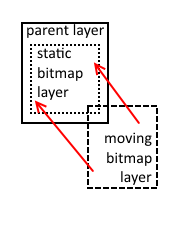 And this is pretty much it. By varying animation duration and start position you can produce various sliding effects

11 replies on “SliderLayer for Pebble”